The Indian men’s cricket team is all set to take on New Zealand in a two-match Test series, starting Thursday. Ahead of the first Test in Kanpur, NDTV has accessed the “catering requirements and menu” for Team India. Apart from the food items listed on the menu, an “important” instruction has been put down, which mentions that there should be “no beef and pork whatsoever in any form and variety”. The other instruction mentions that “all meat items must be halal”. Earlier, reports had emerged about a new diet plan for the team which would exclude beef and pork items, keeping the fitness of players in mind. Sources have now informed NDTV, through the “catering requirements and menu” document, that both the items have indeed been excluded. 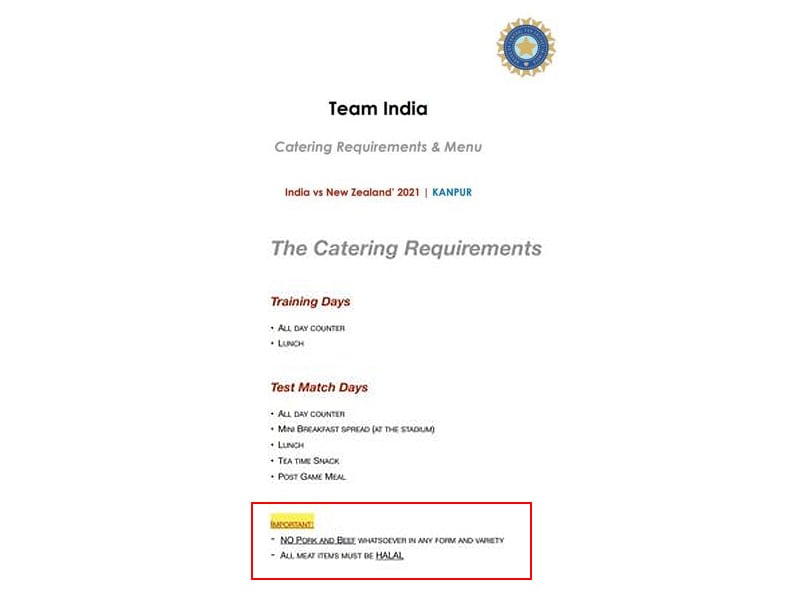 Fitness has been an extremely important criteria for the Indian cricket team for a while now, with Test and ODI captain Virat Kohli spearheading the agenda ever since taking over the reins of the team. The introduction of the yo-yo tests furthered this culture of putting fitness as a top parameter to make it to the Indian team.

Ajinkya Rahane will be the stand-in captain for the first Test match, in the absence of Virat Kohli, who has been rested. Cheteshwar Pujara is Rahane’s deputy. Kohli will return to lead the team in the second Test in Mumbai. Opener and India’s new T20I captain Rohit Sharma has been rested for the entire series.

Team India will embark on a full-fledged tour of South Africa after the Test series against New Zealand ends. The first Test against South Africa begins on December 17 at The Wanderers Stadium in Johannesburg.

Topics mentioned in this article

Cristiano Ronaldo Sends Out a Special Message to All His Fans...